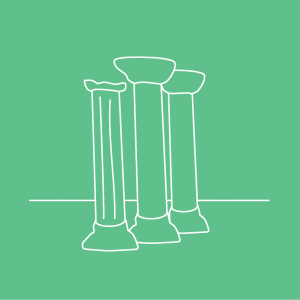 Inhabited since at least the Neolithic period, Lesvos had developed an advanced civilization by the Bronze period, rivaling the Trojan and Mycenean civilizations of the time. The island is steeped in history and rich in culture dating back nearly 3,000 years as evinced by the ancient temples, roman stone bridges and aqueducts, Byzantine and post-Byzantine castles, churches and monasteries, water mills and stone threshing floors, and early industrial olive presses, as well as heritage settlements built with stone hand carved by master masons, jewels of local handicraft and traditional architecture. Ancient ruins are scattered all over, on land underwater, and in many places have been integrated into today’s structures – a home’s exterior wall, pavers on the path you’re walking on. So look closely…There are as so many impressive archaeological sites in Lesvos as: the Castle of Mytilene  and the Ancient Theatre, the Yeni Mosque, the old Ottoman Baths, the Dome of Agios Therapon in Mytilene, the Roman Aqueduct in Moria, the Messa Sanctuary, the Kremasti Bridge, the Ancient Arisvi in Kalloni, the Klopedi and the temple of Apollo in Agia Paraskevi village, the ancient city of Pyra in Achladeri, the ancient Makara in Apotheka, the Acropolis of Eresos in Skala of Eresos, the Archaeological site of Thermi, the Castle of Sigri, the Ovriocastro in ancient Antissa and ancient Mithymna in Molyvos.

Once a great military, merchant and handcraft center, Molyvos has been plundered, colonized, occupied, or ransacked on various occasions – according to the poet Parthenios, even Achilles once breached the city’s powerful fortifications through the treachery of the daughter of King Peisidikis. Here lie remains of ancient Mithymna dating to the Post-Geometric, Archaic, Hellenistic, and Roman eras between the 8th and 1st centuries BC. Visitors will naturally be drawn to the Byzantine castle that crowns the village. Built early in the 1300s, it was renovated in 1373 by the Genovese Frangisk I Guateluzo and again by the Otoman Turks in 1462 and is one of the best preserved in the Eastern Mediterranean. The Ottoman Baths and Mosque, the public fountains, the architecture of the 19th century mansions, the Historical Municipal Library with its 13,000 volumes, the Municipal Art Gallery and its over 200 paintings and sculptures of modern Greek artists (Halepas, Vasileiou, Mitaras, Tetsis, Rokos, Sikeliotis, Mpotsoglou, Katrakis, Varlamos, Hainis, Prekas, Tasos, Akrithakis, Cocosco, and others) are all pieces of the rich cultural landscape you’ll savour in Molyvos.

The museums you should definitelly visit in Lesvos