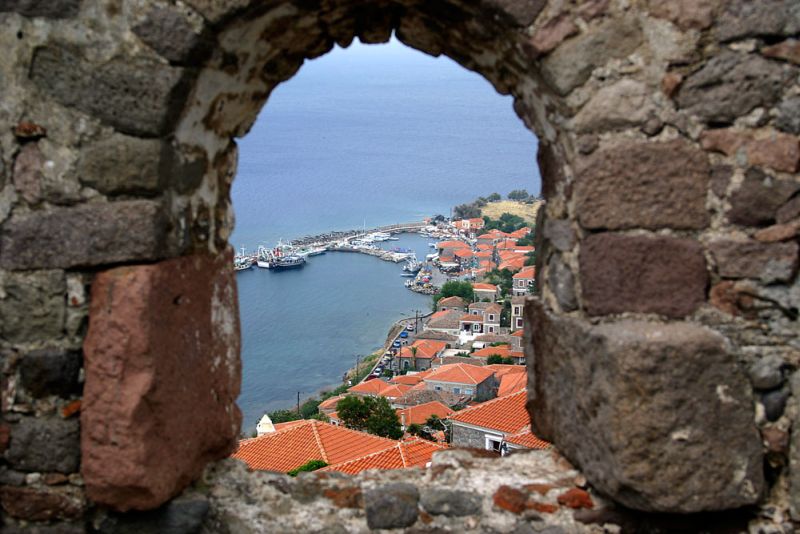 Molyvos stands opposite Troy and the coast of Asia Minor. It is built on an ancient rock, rising gradually up towards the Byzantine fortress that crowns its top and protects it, as does the primordial mountain of Lepetymnos. Inheriting the glory of ancient Mithymna that stood in its place two thousand years ago, Molyvos presents an extraordinary range of colours depending on the angles of the sun and light that strikes it throughout the day. Enclosed courtyards with jasmine and bougainvillea, winding cobbled streets and open squares sheltered by old growth plane trees will inevitably give you a sense of the area’s history. Here you can spend your days among constant reminders of the past, from Hellenic antiquity, the Roman times, the Byzantium and the Venetian Gattelluzi era, to the post Byzantine era, the Ottoman period, the Middle Ages and even the more recent Asia Minor refugee years, a time of massive internal and external immigration. From the ancient city of Mithymna that was located in the area behind the harbour, to the remains of the Roman Aqueduct, the Byzantine Castle and the famous post-Byzantine churches of Taxiarchis, Ag. Panteleimonas and Ag. Kiriaki, to the Ottoman Baths and the Mosque now serving as the area’s conference centre, to the public fountains and the excellent samples of 19th century architecture mansions (such as the current School of Fine Arts), to the little stores in the village’s market centre which is covered in wisteria, and to the old fishing harbour… it will all have you magically traveling to another era. You will also find the past in writing among the 13,000 books at the Historical Municipal Library of Molyvos in the market centre. And you’ll see and admire the modern side of Greece at the Municipal Art Gallery among the 200 paintings and sculptures of modern Greek artists (Halepas, Vasileiou, Mitaras, Tetsis, Rokos, Sikeliotis, Mpotsoglou, Katrakis, Varlamos, Hainis, Prekas, Tasos, Akrithakis, Cocosco etc.). Lepetymnos, the mountain overlooking Molyvos, carries its name from the Pre-Hellenic period and among its rich fauna and flora you will come across beautiful small villages with exceptional rural architecture. Vafios, known for its traditional cuisine, Argenos and Lepetymnos, known for their excellent dairy products, Sykamia, home of one of the best known Greek writers Stratis Myrivilis, and Skala Sykamia, the picturesque fishing village with the famous and most-photographed chapel “Panagia Gorgona”. Sailors and travelers have lived here in Molyvos from ancient times to the present day. Farmers, cattlemen and fishermen, merchants and craftsmen all have their place in the local economy. Bringing together the generosity and the wisdom of the East and the West, they symbolize the spirit of Molyvos. You can still meet the shipwright mending fishing boats in the harbor, the fishermen heading out to sea by dawn, the wood and mason craftsmen, the weavers, ceramists, icon-painters and jewelry makers. They can all indulge you into a world of local creativity and expression. And in local fairs and traditional celebrations, often with roots in paganism as worshipping customs from antiquity, folk musicians and singers and the sounds of their traditional instruments, the “santouri” and “laouto”, will also carry you back in time.

In Molyvos space diffuses and time stands still. It becomes a time of fairytales. It humanizes and transforms you. Molyvos will always invite you to live in the moment and to be reborn in its light.